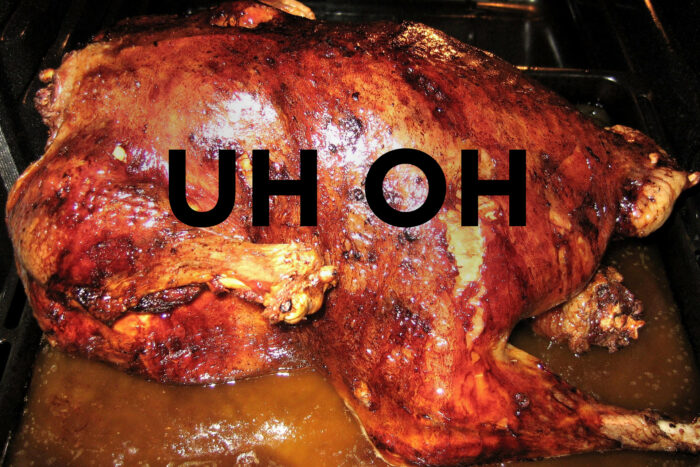 As our Happy Thanksgiving to you, we want to share some of our best Thanksgiving fails. So here’s to a little chuckle and some stress relief as we navigate our kitchens, families and friends.

The cat made me do it

I was multitasking in the kitchen as you often do during holiday meal prep and was in the middle of making cinnamon rolls when the cat started pestering for food. I set the container of frosting down and quickly opened a can of cat food. After feeding the cat, I went back to making the rolls and grabbed the lid to the frosting container for a moment of guilty pleasure. Something tasted off as I ran my tongue across the lid… of the cat food container. I never looked at cinnamon rolls the same. -Lisa P

The year my grandma passed away, we happily agreed to carry the prepared turkey to grandpa’s house and cook everything there. We fired up the oven and got to cooking. After a bit we noticed a very strange and unpleasant odor. After investigating we found that mice had made a nest in the back of the oven. So that year we celebrated around a bucket of Kentucky Fried Chicken with all the windows open. -Carrie G

My brother and dad decided one year to jump on the deep-fried turkey bandwagon and fry one themselves—in the garage. After a few adult beverages, turkey tending duty became less of a priority until mom came into the house and said, “are you aware the garage is on fire?” -Darren

A little something extra…

I was making a turkey and forgot to pull out the bag of bag of turkey parts that was in the butt of the turkey. So when we were cutting and eating it, a white bag started showing….OOPS! We got a turkey butt surprise! -Amanda

I was letting the cooked turkey rest on the counter and turned around for only a second which proved to be my downfall. When I turned back, I saw our dog Lola standing on her hind legs, going to town on the turkey. We ate it anyway. -Anonymous

My friend and I decided we would try our hand at making gravy from the turkey drippings. She got the gravy started and when I checked on it a bit later, I decided it was time to add the thickener. While I was setting the table, I heard my friend say “what the ____” from the kitchen. Apparently, we had both added cornstarch and voila! Turkey pudding was born. Sigh. -Brett

I never mess up anything…but… One year I had heard about cooking turkeys in a paper bag. So, I thought, “I need to try that”. I prepared the turkey like I usually do. and put it in the paper bag and popped it in the oven. After about an hour, I started to smell something burning! I opened the oven and the paper bag was starting to go up in flames. Apparently, I missed the part about spraying the inside of the bag with cooking oil. -Kathy